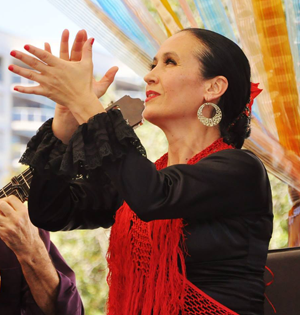 Marina Tamayo is a Sydney based artist. As a standing committee member on AUSDANCE NSW Board, a registered teacher with the New South Wales Education Department, Project Manager and qualified Production Engineer, Tamayo is an active and skilled member of the NSW dance community.

In 1998, Tamayo founded Flamenco Australia. The purpose was to create opportunities for artists and audiences in  making Spanish arts accessible and relevant, in the Australian community. As a self funded venture,  Tamayo took to rural and past the black stump locations, offering communities workshops, and shows. One may say the work was  a pioneering venture for the Spanish Arts. The demand for her services grew exponentially,  and over a period of fifteen years her work covered interstate, and internationally.  Artists direct from Spain were sponsored to assist  in delivering workshops and performances.

After twenty eight years in Sydney, Tamayo engaged and expanded audience engagement in national markets. This was achieved by creating new audiences, either as participants or observers through education, or delivered in classes and performances.

In 2019, Tamayo was nominated by the Australia Dance Council, for her choreographic Spanish contemporary work EMERALD. The nomination was for the category ‘Outstanding Achievement in Choreography’.

Tamayo is passionate about creating holistic curriculum.  Her teaching philosophy holds the firm belief that it is critical for contemporary Australian society to provide accessible and equitable opportunities to immerse, broaden and develop an appreciation of cultural dance, customs and practise.

In 2021, Tamayo worked with Classical Ballet 121, fulltime classical ballet academy, with Gilly Reevie. She was asked to write and prepare the exam curriculum for the Spanish  and Flamenco dance studies in the Australian Teachers of Dancing full time Certificate 4 and Advanced Diploma in Elite Performance course, 2021.

Currently, Tamayo has been working with former Artistic Director of The American Ballet and current AD for Los Angeles Dance Project  Benjamin Millepead. Benjamin Millepied is a choreographer, filmmaker, and former principal dancer with New York City Ballet. Mr. Millepied is a past recipient of the prestigious “Bourse Lavoisier” scholarship from the French government, a winner of the Prix de Lausanne, a recipient of SAB’s Mae. L. Wien Award for Outstanding Promise, and a United States Artists Wynn Fellow in Dance. In 2010 he was awarded the Chevalier of the Order of Arts and Letters by the French Ministry of Culture. Millepied recently finished production on his directorial feature debut, “Carmen. The film will be released worldwide in 2022 by Sony Pictures Classics.

Mr Millepied casted Tamayo as the mother of Carmen, as a Spanish Dance choreographer and performer in his latest project, feature film ‘ Carmen’.

In 2022, Tamayo will be giving weekly general open Flamenco classes at, The Sydney Choreographic Centre , Sydney. The classes are designed for professional level dancers of ballet, flamenco or contemporary dance. The Director of the centre is owned by  Italian ballet dancer, choreographer and artistic director, Francesco Ventriglia.