” Co-presented by Adelaide Festival, the Australian Premiere screening of Carmen at Her Majesty’s Theatre will feature a live dance performance by Adelaide-raised flamenco legend and Carmen co-star Marina Tamayo before the screening. Marina will perform Seguiriyas, which she dances in the powerful opening scenes of the film”..

“We begin in the Chihuahuan desert, where a proud flamenco dancer named Zilah (Marina Tamayo) conjures up a wild storm from the thin wooden plank beneath her feet while cartel thugs point their guns at her. Moments later, Zilah’s thunderous footsteps – the upcoming film’s wild heartbeat . Carmen, by Benjamin Millepied, 2022 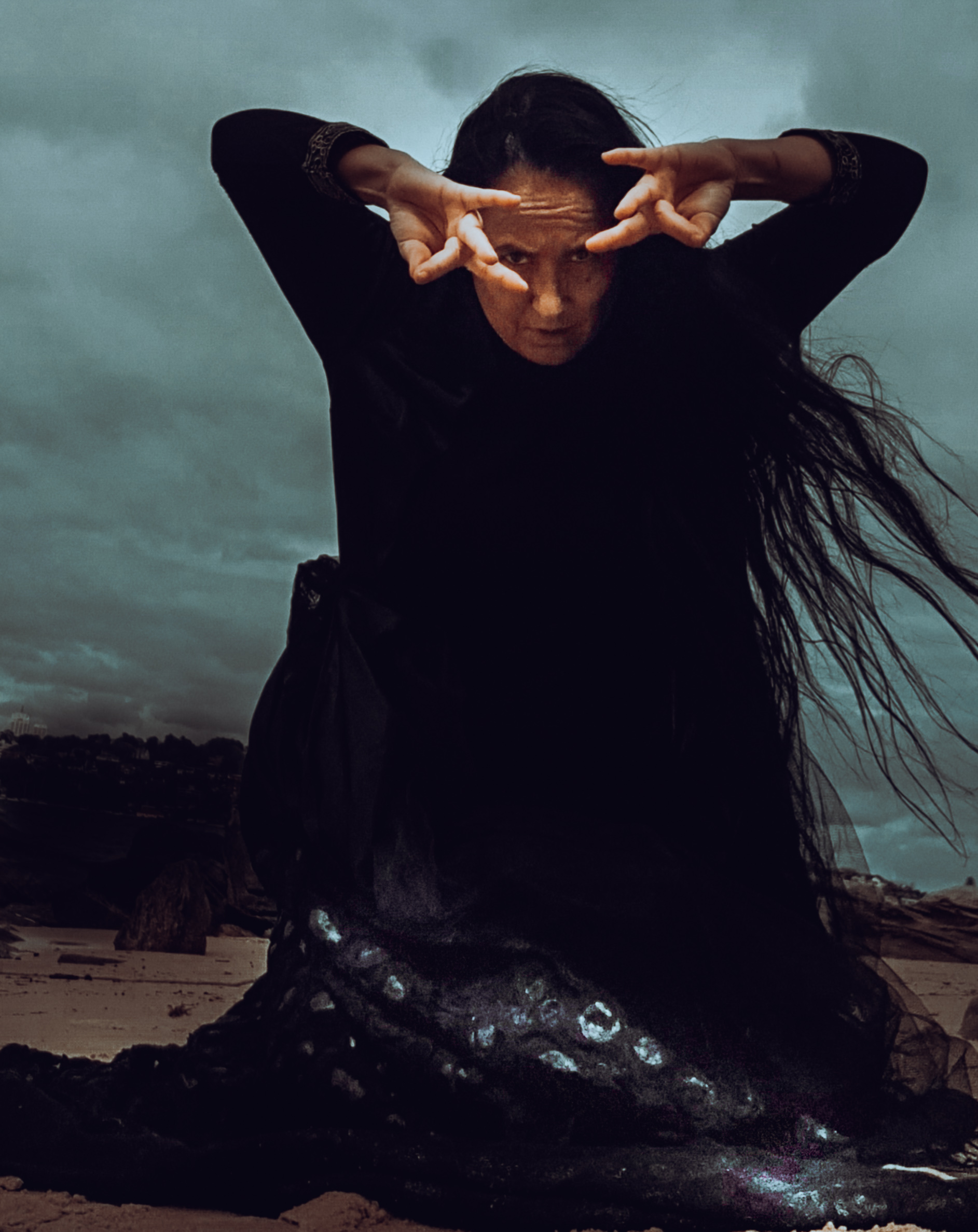 Marina Tamayo is described as an artist possessing ‘duende’ – gitana. Former dance partner artist (1982 – 1986) Antonio Vargas known from Strictly Ballroom fame, playing the role of the Flamenco dancing father, RICO, describes her as “a dancer that holds nothing back”,  Aitor Hernandez  former dance partner (2015 – 2019) , former dancer of the Nacional Ballet of Spain, described Marina as  “one of the most powerful artists I have met on stage, crafting magic in her every movement” and for her solo in Benjamin Millepeads (2022) feature film re-imagining CARMEN, US Edition Film Magazine Variety  journalist   Jazz Tangcay described her solo as ,’jaw dropping’.

Review US news: ” The pre-release film festival kicks off in the fall via Sony Pictures Classics, in Mexico with a stunning flamenco figure featuring Marina Tamayo as Carmen’s mother on the family home grounds.   Sept 12, 2022 Carmen, by Benjamin Millepied

In the last few decades, Marina Tamayo has dedicated herself to solo performance and theatrical work. Sydney based, she is a multi nominated and award winning artist. She  recently was recognised at The Australian Dance Awards for her  forty years of teaching, performing and preserving Spanish culture in Australia; the category ‘Service to Dance’. The following year, 2019, she was recognised for her  ‘Outstanding Achievement in Choreography’ with Aitor Hernandez former dancer of the Ballet Nacional of Spain.

In 2021, she was accepted for a choreographic residency as a DAIR contemporary choreographer sponsored by AusdanceNSW 2021. This work was an experimental dance composition co created with Victor Zarallo formed Sydney Dance Company and The Scottish Ballet Company, with their reimagining of BOLERO. They are developing this work in 2023 for theatre with The students from Australian Music and Performing Arts Academy, AMPA.

In 2021 – 2022, Tamayo took a position in Ausdance on the Standing Advisory Committee.

During this period, Tamayo was afforded the opportunity to be a resident artist and present her choreography for Ausdance 45th birthday celebration at Bangarra Dance Theatre, An Evening on the Water. 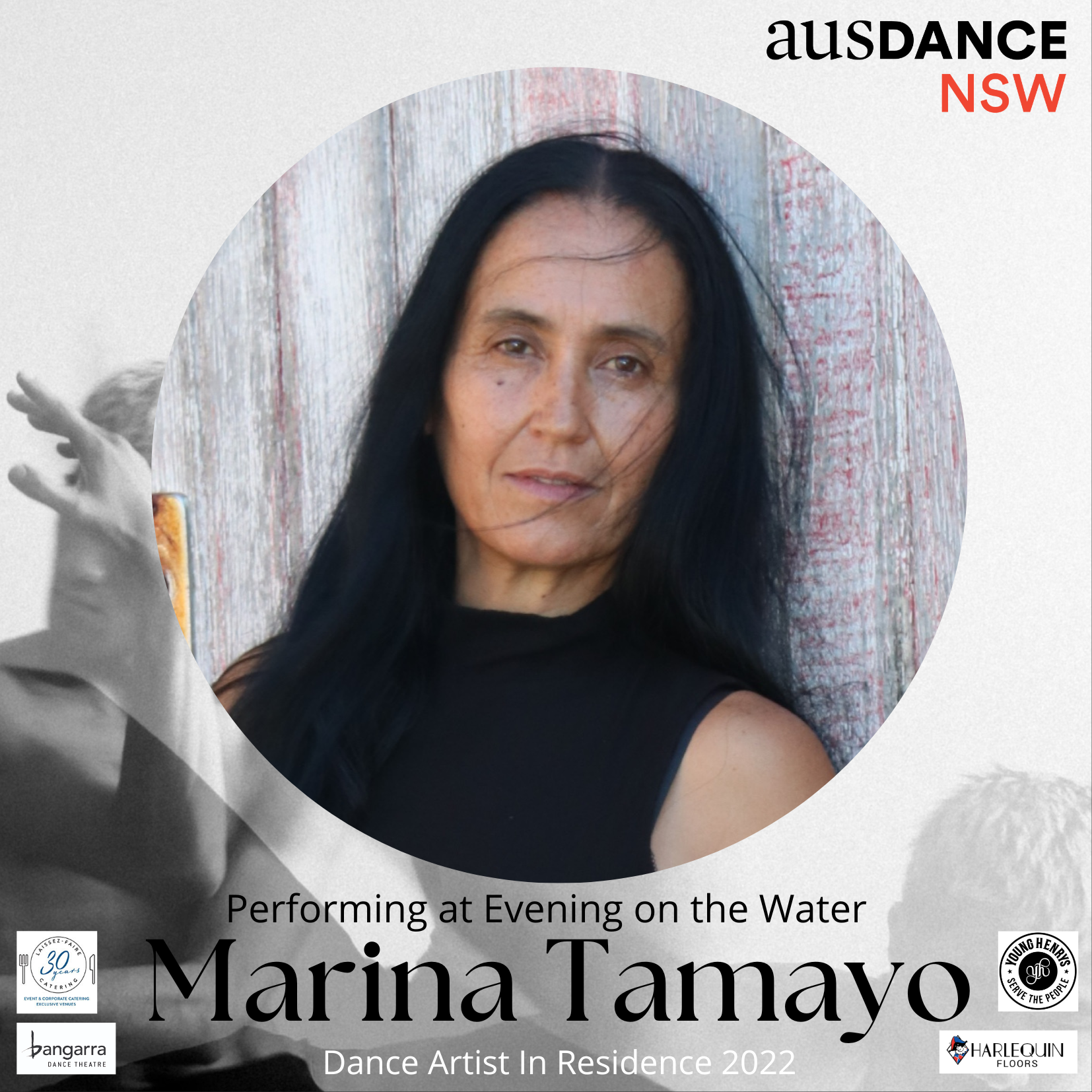 Relentless in the pursuit of cultural engagement, Marina Tamayo spends much of her time in Australia teaching Flamenco, creating shows with her Flamenco Ballet company Las Peinetas and working freelance within communities, for the community.

In 2023, Tamayo has been invited to teach and choreograph at : 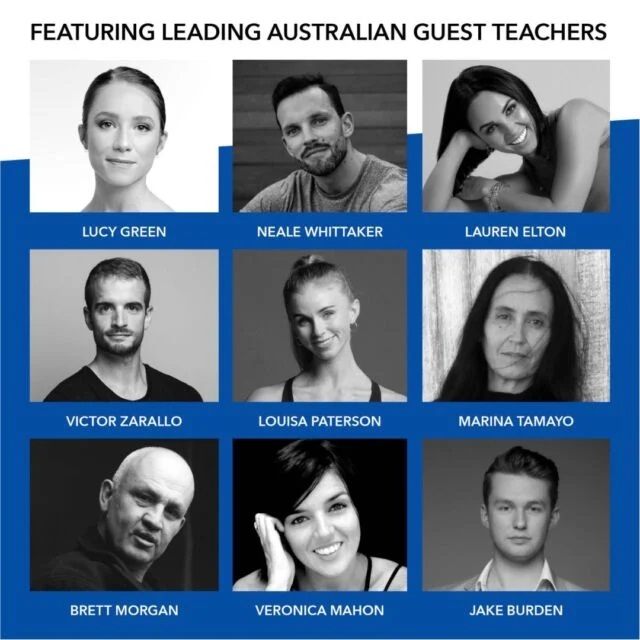 for 2023, Tamayo secures another year contract at Chatswood Public School with the Department of Education, to deliver the CAPA Syllabus, NESA for K to 6 dance.

Relentless in the pursuit of cultural engagement, Marina Tamayo spends much of her time in Australia teaching dance specialising in Flamenco and Spanish dance. Tamayo, creates shows with her Flamenco Ballet company Las Peinetas and works in the community, for the community. 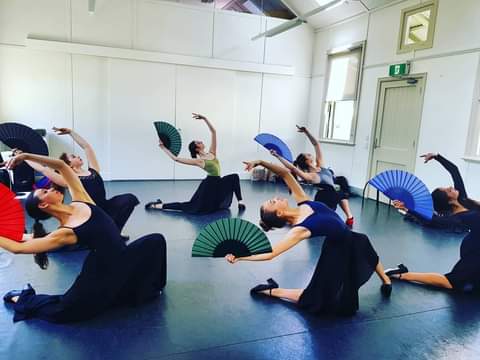 Marina Tamayo views her works as a gift to share:

” I believe in the notion that artists are called where they are needed the most. So, wherever I go, I go with my whole heart”. 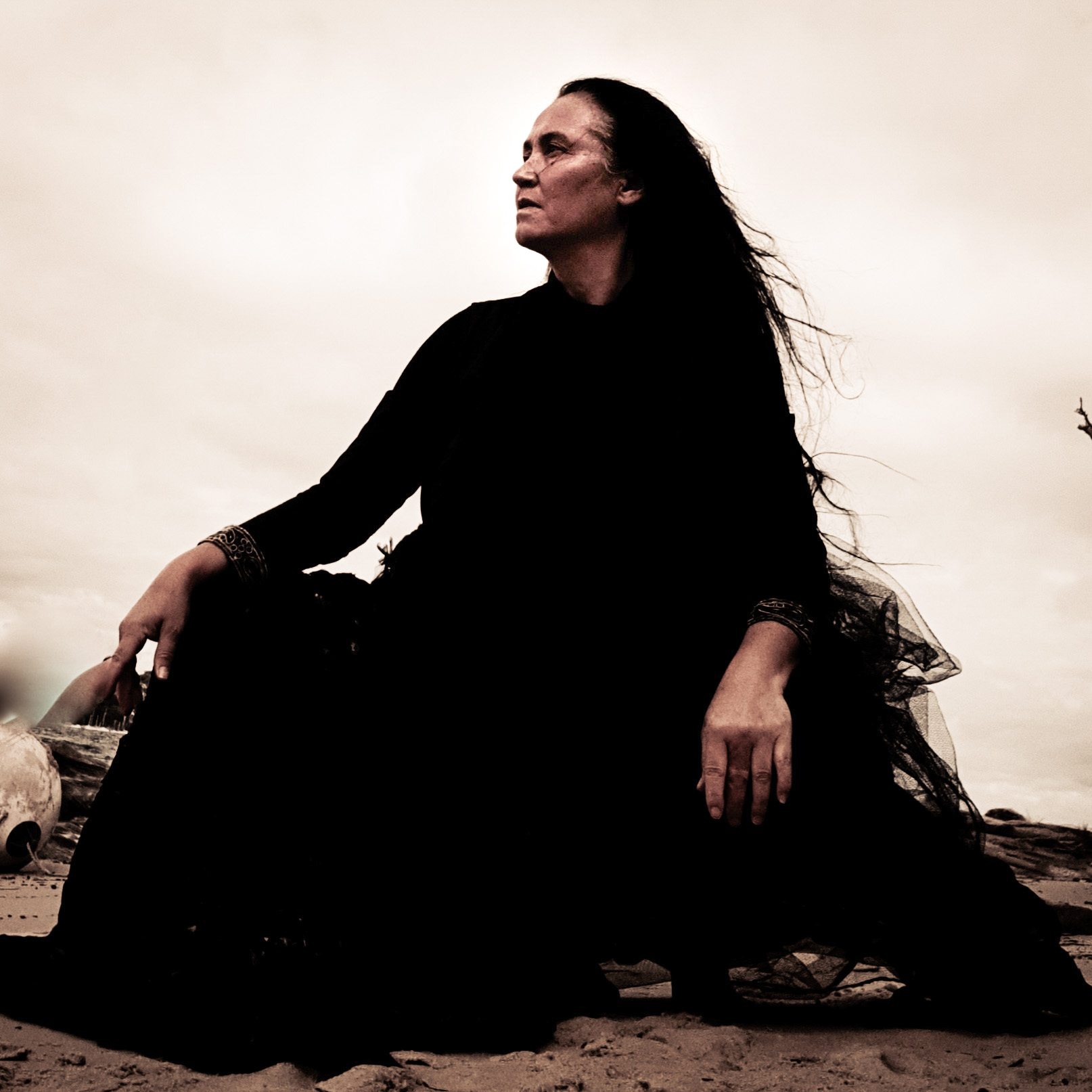 Artist: Marina Tamayo, Flamenco Australia. Do not use without permission.

” The seats in the theatre were shaking. My bones rattled as Carmen’s mother was dancing and stepping as the score started sweeping in. “

Marina Tamayo is a Sydney based freelance teacher and choreographer.  Marina began developing her skills in choreography, teaching and her performance career simultaneously, since 1982.

Forging a career in Sydney.

Tamayo moved to Sydney permanently in 1996. Her Flamenco Sydney classes began in 1998 at The Sydney Dance Company wharf  studios, Spanish Dance School,  and The Spanish Club Sydney. Later, Marina opened her own professional Flamenco studio, as the founder and Director of, Flamenco Australia, 1998.

“I love dancing and have taken up flamenco dancing with teacher Marina Tamayo and my dance partner from the show Megan Wragg is doing it with me – I love it.” Miguel Maestre Chef Living Room ch10

In 2006, Flamenco Australia reached out to the international arts market, drawing artists from Spain to Australia, sharing their expertise by mentoring Australian flamenco dancers and musicians in formal international workshops and performances.

Marina Tamayo has performed, taught and choreographed globally, for over 38yrs.   Her studies include Ballet in both RAD and Cecchetti ,  classical pianoforte music composition and theory at The Conservatorium of Music, Audio Engineering and has postgraduate studies in Production Sound Engineering. In addition, graduated in 2021 with a Bachelor of Education from Curtin University and currently registered with the NSW Board of Education (NESA) as a Teacher.

Ausdance NSW DAIR, 2021 Grant for residency at The McDonald Performing Arts College (completed in 2022). In collaboration with Victor Zarallo for a reimagining of BOLERO. 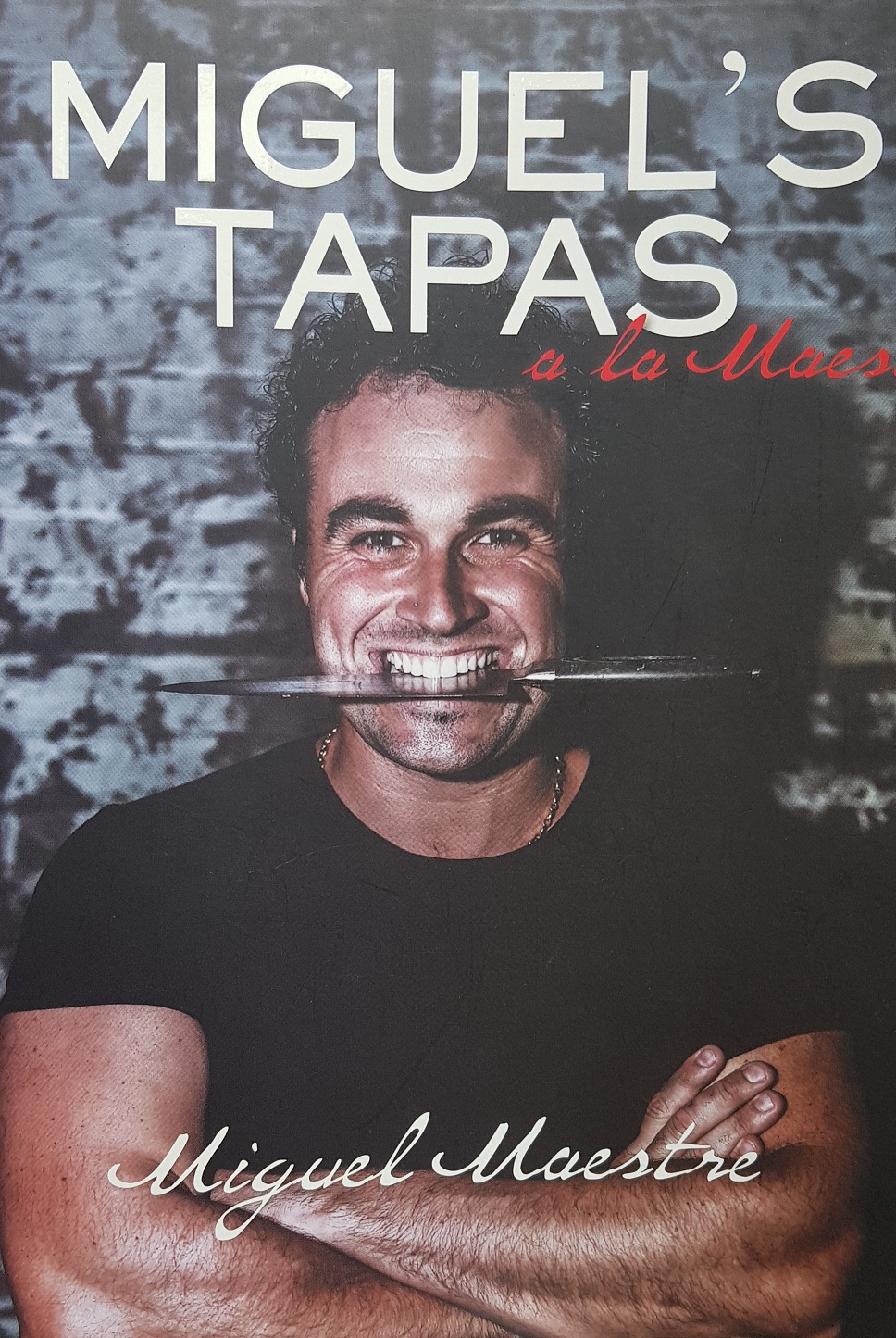 Marina Tamayo is a classically trained musician and Audio Engineer. With these two skills combined, Tamayo branches out into recording and composition. Often acting as musical director, Tamayo produces Flamenco music shows for all events and has recorded several CDs.

Lately, she has been editing for dance shows including co-composing her own soundtracks for theatre. She does this by using digital software and working alongside SOUNDMODA founder and award winning music editor Aaron Lee, to design full scale dance productions like, award nominated and winning EMERALD (2019 – 2021; and her new collaboration with Victor Zarallo, a reimagining of BOLERO (2022 – 2023).

As a choreographer, Tamayo is dedicated to quality and authentic creative process. As an advocate for social justice, Marina promotes inquiry inside and outside boundaries to promote discussion, challenge ideas, and assumptions in varied contexts. The purpose of this deep inquiry is to contribute towards social change, for equity in all living beings, through performing arts.

Tamayo’s theatre works are guided by Andalusian folklore and storytelling. These choreographies often explore human nature, our needs for connection and include personal narratives.

”  Likely the most professional modern flamenco dancers to grace us. Performers’ footwork, costumes and music were superseded only by their energy, grace and passion.Final Word: Spectacular”
– Jenny Smith, Rip It Up
RIP it Up website – http://www.ripitup.com.au/article/5255    Tamayos The Sounds of Spain

Tamayo’s  objectives for her dance performance and choreographic contributions focus on connecting and inspiring her audience, to be a voice for the unspoken, to listen to the unheard and contribute towards making a more mindful society. 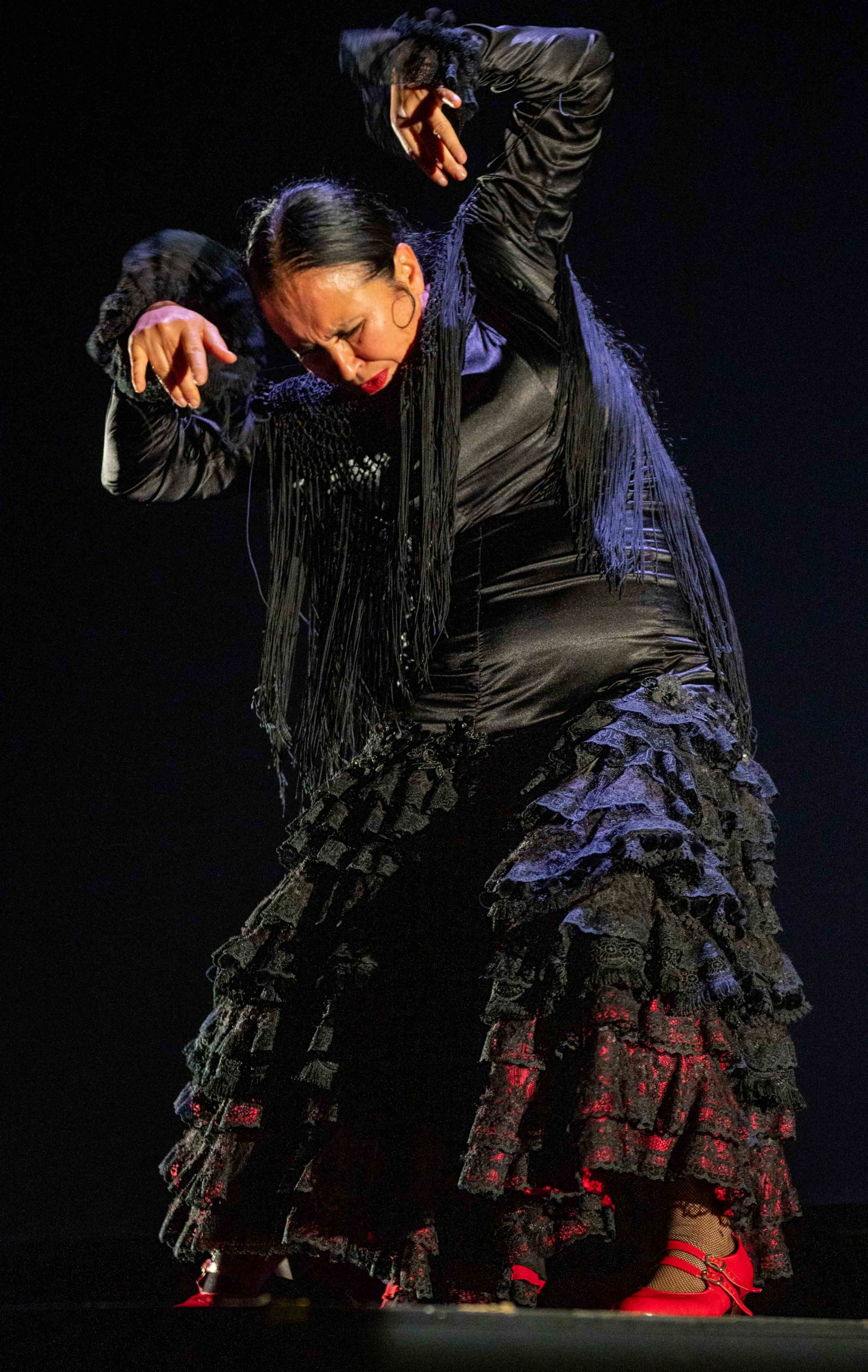 October 22nd, Marina was invited as the guest soloist, to perform at the  Adelaide International Film Festival for the premiere of Carmen by Benjamin Millepead and Goalpost pictures.

In August 2022, Marina Tamayo was invited to perform as soloist at the Winter Exhibition held in The National Gallery of Victoria for the Picasso Centurion dinner, on this occasion Tamayo was accompanied by acclaimed international Jerez guitarist,  Paco Lara.

In September 2022, Artistic Director Francesco Ventriglia  invited Tamayo to be a guest teacher to design a Master Choreographers Program 2022 at The https://www.sydneychoreographiccentre.com/, Sylvie Guillum as Patron. 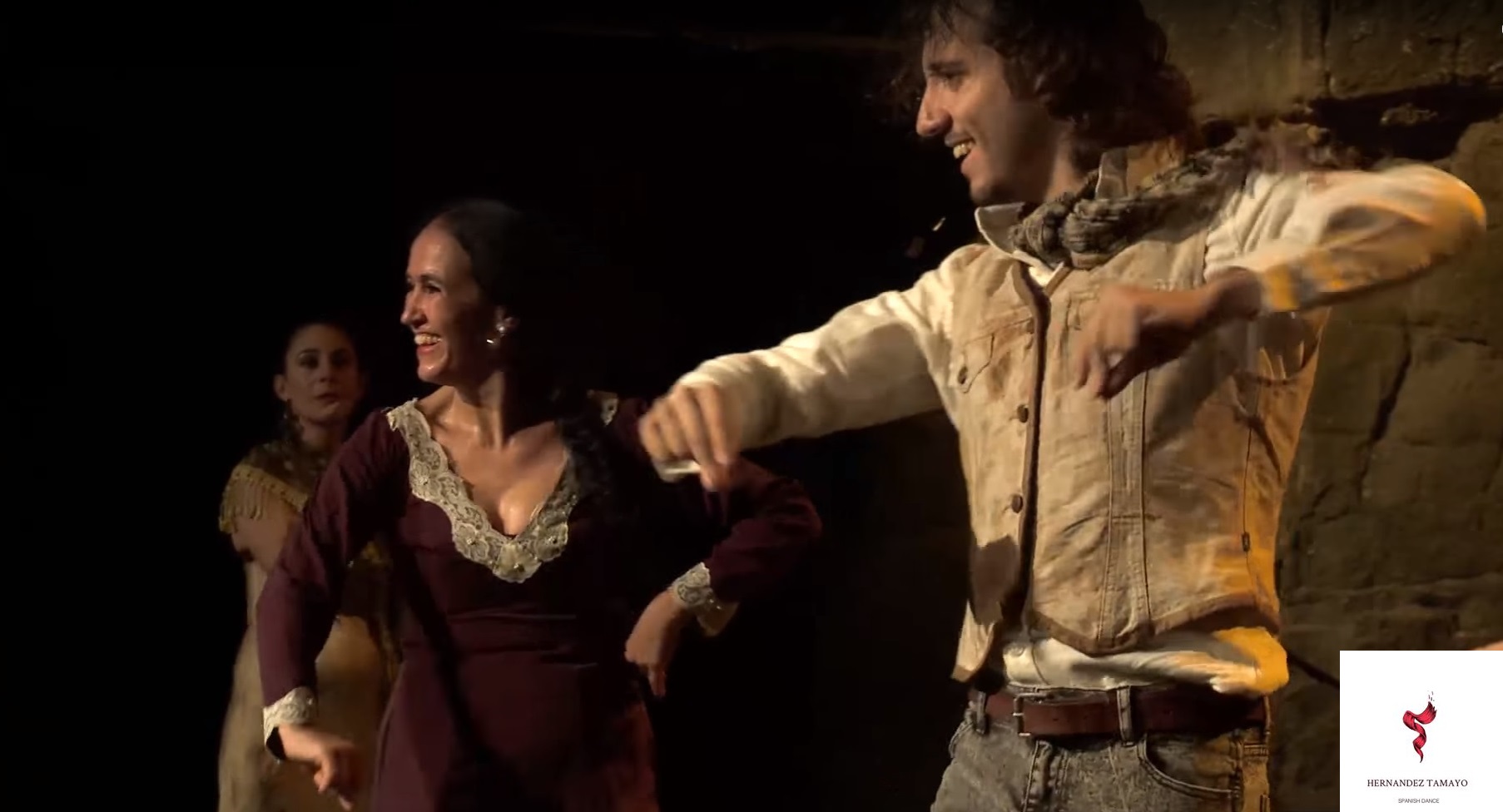 Image: INERTIA. Photo by Adam Sills, 2016. Peacock Theatre, Tasmania. Copyright. Do not use photo without permission.

Marina Tamayo has dedicated her career towards raising the level of professional Flamenco dance practises within the Australia dance industry for over 38 years. This is achieved by adhering to and aligning with safe dance practises, writing contemporary curriculum, embedding professional assessment and protocols and quality education. Academically, Tamayo committed herself to gaining formal teaching and project qualifications to ensure professional standards are achieved. The following are some  academic studies;

Degree in Bachelor of Education, Diploma in Audio Engineering and Production Engineering, Certificate in Project Management, Contract Law, Business Analysis, Effective Communications, Implementation of Projects. Philosophy and Metaphysics at Macquarie University, Visible Learning with Corwin Australia. Further studies in both pianoforte classical piano at the Conservatorium of music and Theory of music, and composition.

Press on this link below to see the short promo.

EMERALD, crossed various dance disciplines, and was presented in a contemporary format.  It was constructed through an arts residency of Professor Kelly Drummond-Cawthon and premiered in Hobart, Tasmania, NSW  at the MOVE Contemporary Dance Festival. It was included into the Festival of Auckland Arts program and was presented at the Auckland Fringe, New Zealand season. The show received five stars and rave theatre reviews. EMERALD picked another award for its courtier costumes designed by James Penrose (Melbourne) and Hernandez Tamayo at the Auckland Fringe Festival, New Zealand, 2020 for ‘Best Costuming’.

Photo by Susan Sisel, Hernandez Tamayo in EMERALD 2018, Tasmania. Do not reproduce without permission.

An exploration of how we interact, through inertia. Drawing on folk, Spanish and Flamenco dance storyteling, With Tony Tonks, Jesus Olmedo, Rut Santamaria, Peter Kennard, Aitor Hernandez and Marina Tamayo.