Traditional Spanish, Contemporary and Flamenco professionals in both Australia and Spain.

Recent and upcoming theatrical works  ready for touring and presentation are:

Nominated for “Outstanding Achievement in Choreography “” by the Australian Dance Awards, 2019.

Flamenco dance as you have never before seen in Australia. Passionate and powerful – EMERALD is an intrinsic fight for survival.

Emerald Interweaves traditional and contemporary Flamenco dance and draws attention to our ever-changing skins throughout our lives.

A dark tale, taking you into the shadows of your intrinsic fight for survival.

“To know there, you have to go there”

EMERALD must be seen to be believed!
Watch the electrifying trailer HERE 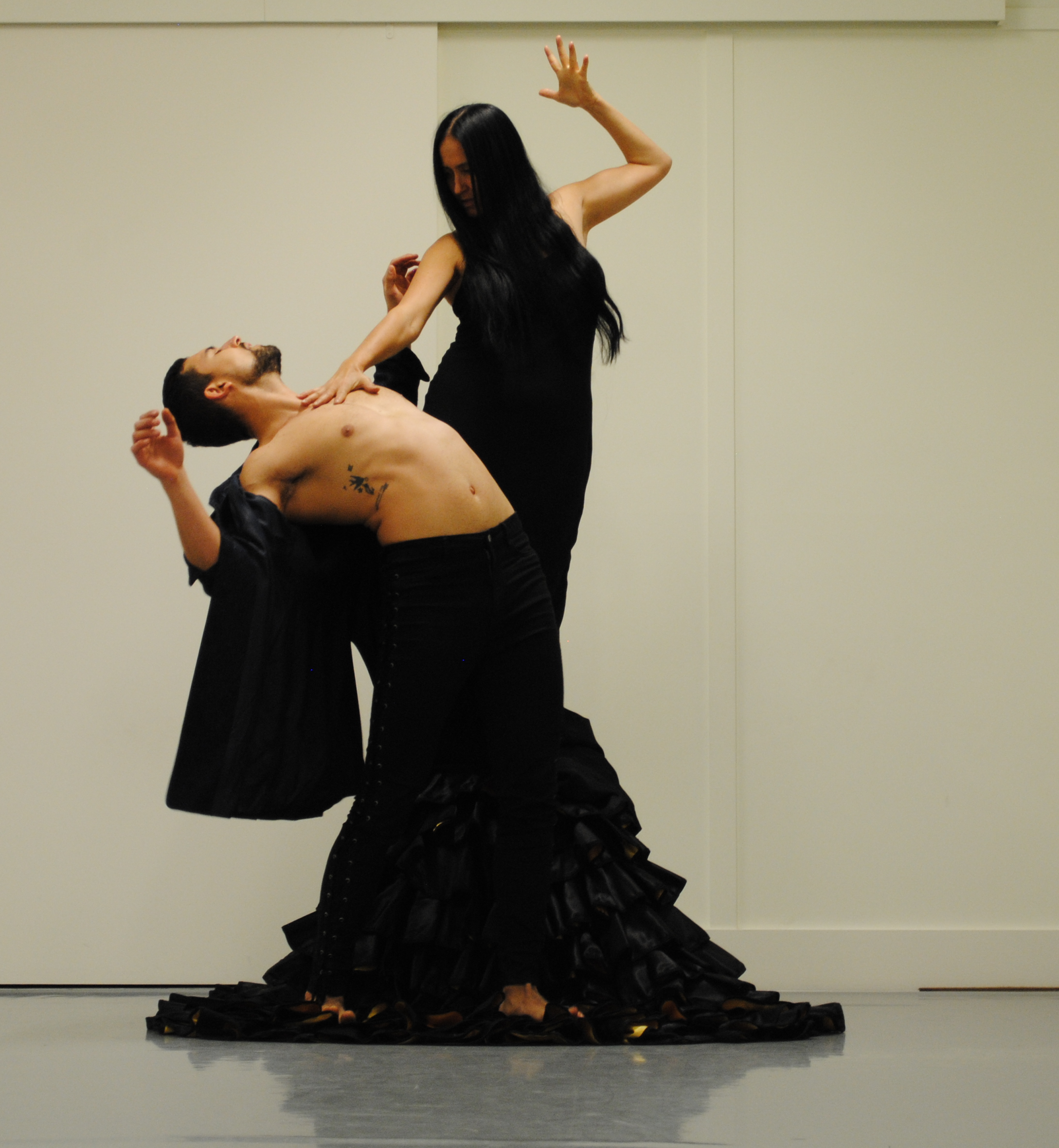 Lesley writes for The Mercury and Dance Australia, and she has just completed a term of four years on the Ausdance Australian Dance Awards panel.

This is a traditional presentation of Folk and Flamenco dance and music. This evening will take audiences to the authentic roots of Spanish Dance ignited with the passion and fire of Flamenco. These world-class performers come from prestigious companies of Spain and will raise the roof off the Moonah Arts Theatre with their stage presence and mastery of their craft.

folKmenco is a new presentation by the newly formed Dance Company Hernandez Tamayo Spanish Dance Theatre. The work promotes the artist’s cultural heritage with traditional folk songs and flamenco dance of Spain. It is set in a town square and based on tales friends tell on a Sunday afternoon. This is folklore at it’s best; story telling.

A night of Spanish authenticity, world music, and culture, folKmenco is a feast for the senses. Direct from Spain these artists are world class. Reviews 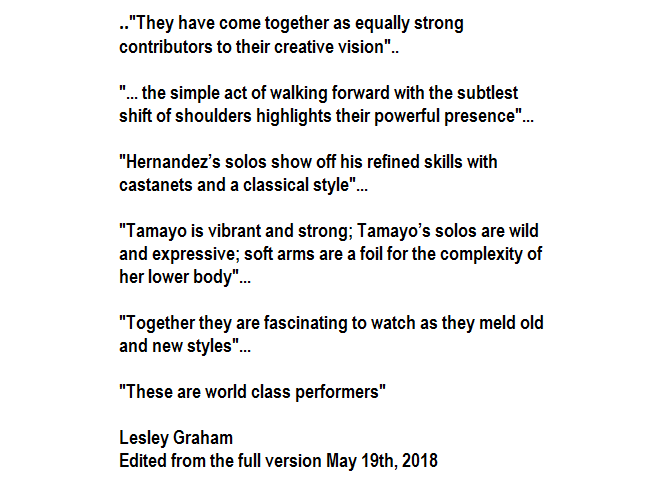 Lesley writes for The Mercury and Dance Australia, and she has just completed a term of four years on the Ausdance Australian Dance Awards panel. 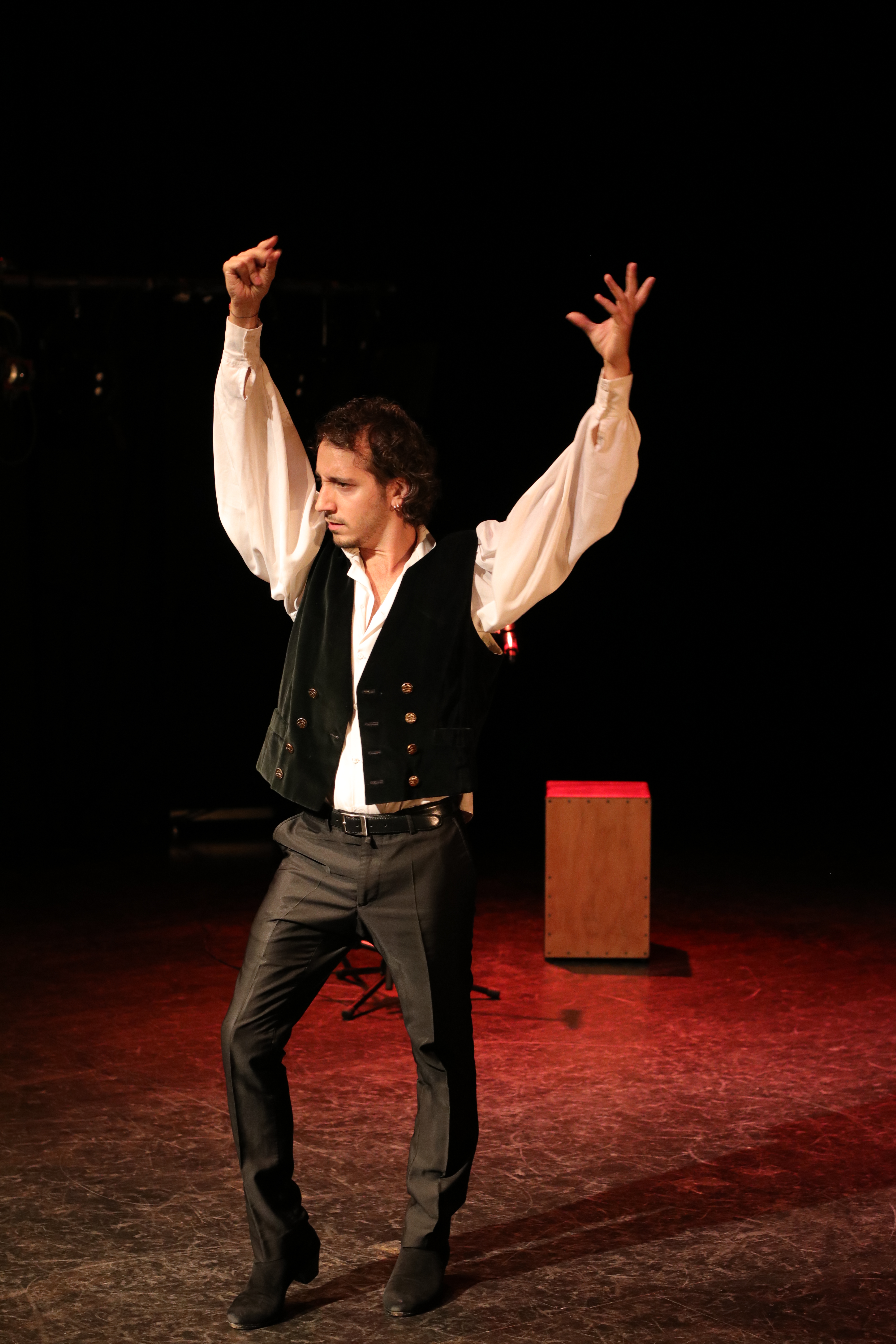 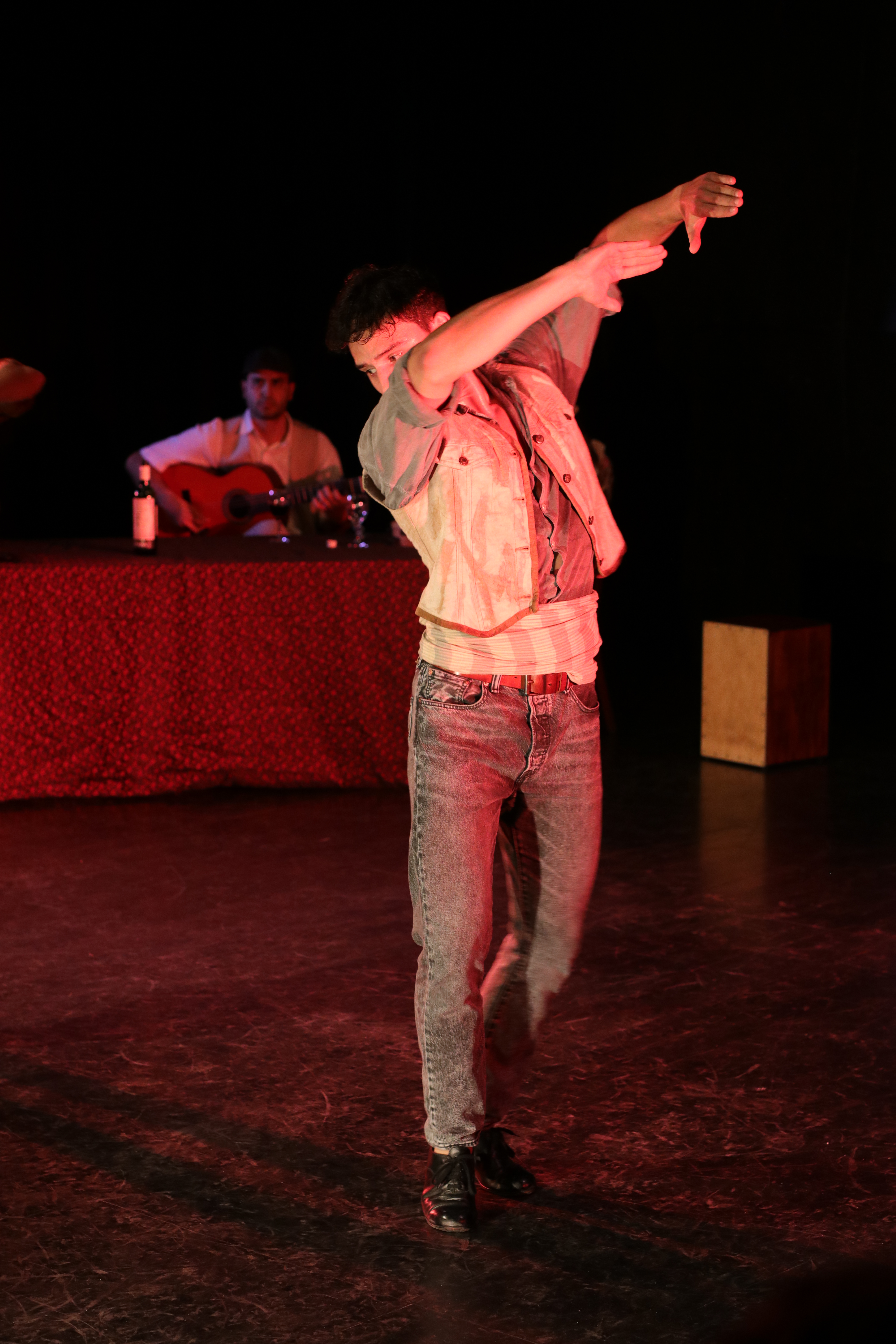 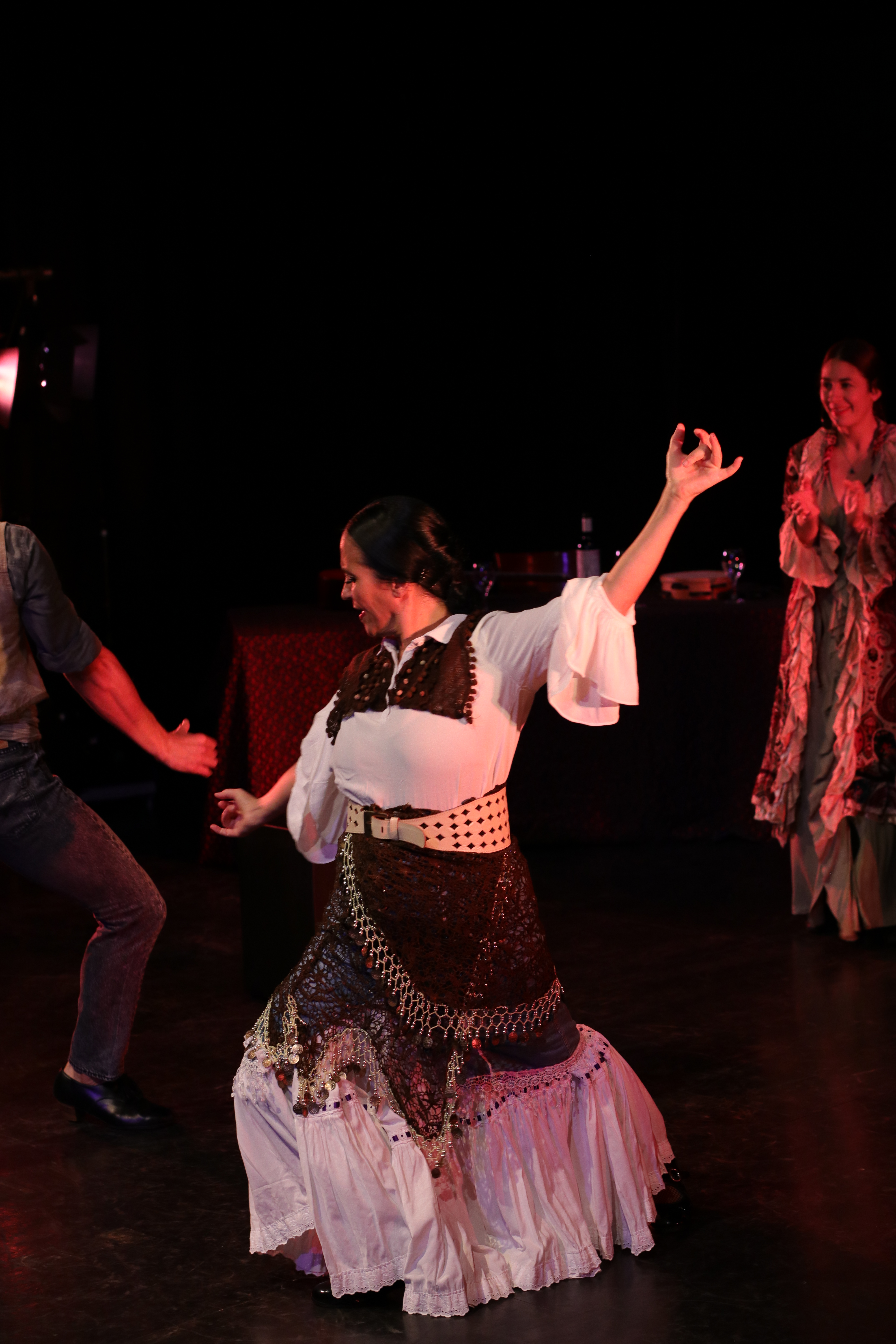 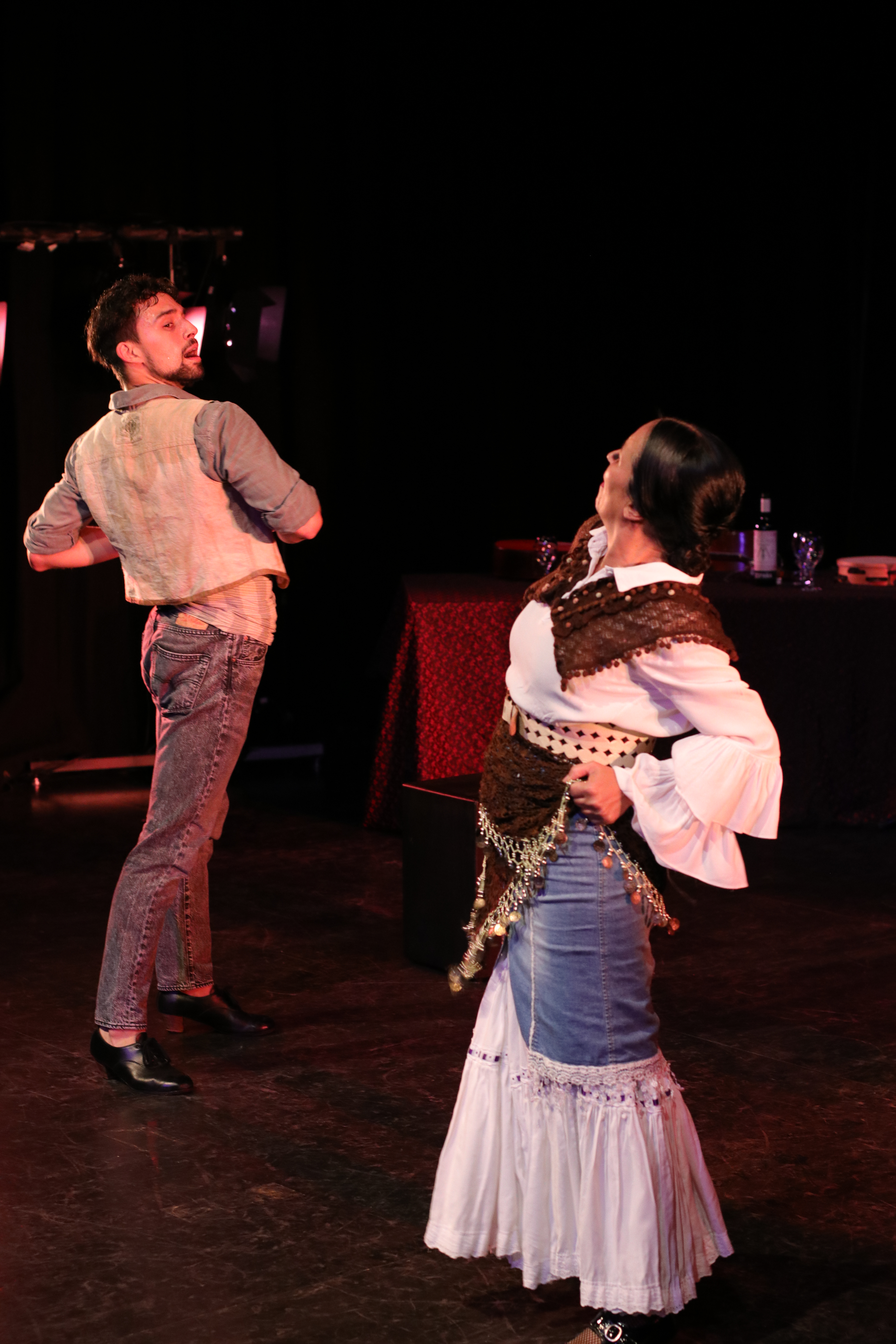 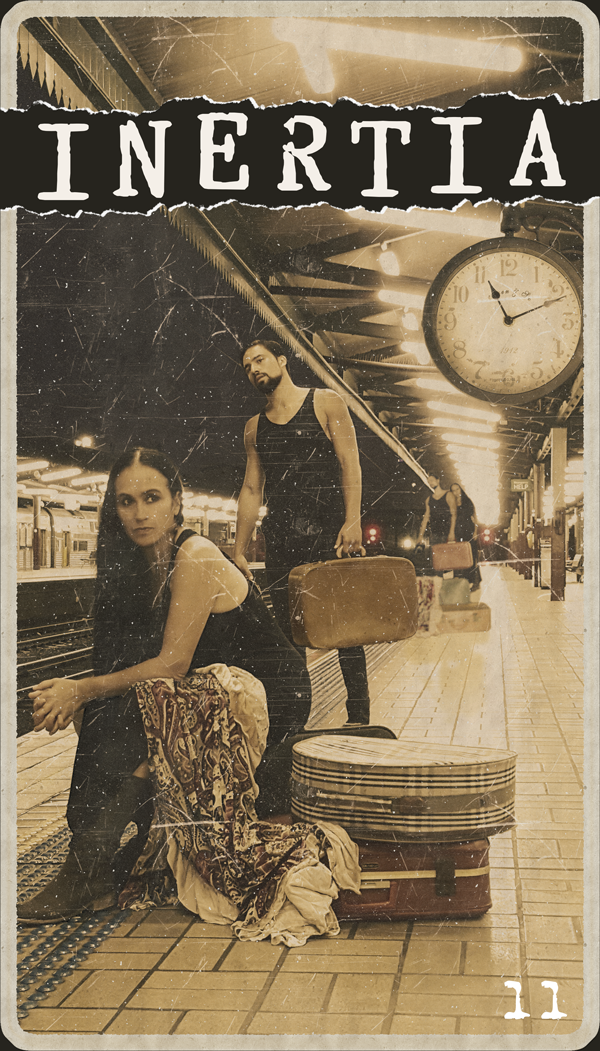 “Inertia, what an incredible show, what an unexpected delight. I knew it was going to be an amazing show but the entire production drew me in much more than I anticipated. The set, the costumes and not least the artists and their energy made it one hour I’ll never forget” L.Zheng

“A special show with awesome performances from everyone involved! Loads of energy, great music and an amazing look into Spanish culture….made me want to go back to Spain! Bring the show to Melbourne!” J.Oates.

“Pure MAGIC! The show last night was incredible, Inertia is a unique performance, unlike any I’ve seen before while still exuding that authentic, familiar flamenco rhythm.
Such an amazing line-up of multi-faceted artists, thank you for sharing your talents!” J.Ryan

“I loved it! Loved it!! Loved it!!! Thank you very much for such a magical and amazing show!!” M.Kiowa

“This beautifully crafted show is full of energy, passion and a little humour that encompasses song, dance and music by highly skilled artisans that was truly brilliant, and a joy to experience”A.Stroud.

“Powerful performances from all. What a pleasure to see the creative talent of Aitor, the exciting dancing of Jesus, and Marina Tamayo who demonstrated that when it comes to expressing the soul of flamenco, age and wisdom triumphs over youth, as she out-danced her highly talented young partners. Eagerly awaiting future performances” N. Wise

“So happy I got to see the show last night. It was amazing, the dance, music & location were fabulous. Such passion is so inspiring! Bravo!” J.B

INERTIA is a culturally rich Australian product. The show exudes diversity, equity, and inclusion ignites the artistic senses, inspires and moves the audience with rapid- fire feet, passionate dance in a theatrical thread. The show contains all the passion and spirit of Spain performed by it’s world class Spanish/Australian cast members.
We are currently seeking professional representation in the Australian and regional sectors, Asia- Pacific and Asian markets to tour, and present INERTIA for curated festivals, corporate events or longer term residencies in theaters. Contact us: admin@flamencoaustralia.com or +61 415384038

The Sounds of Spain

Flamenco Australia is proud to present The Sounds of Spain.

This premiered at the Adelaide Fringe Festival and was awarded 4.5 stars by The Advertiser. ” The Sounds of Spain” was sponsored to debut their show in NSW  2015. The Sounds of Spain is a historical journey featuring sensational world champion Irish dancers  Anthony Street and Peta Anderson from ‘Riverdance’. 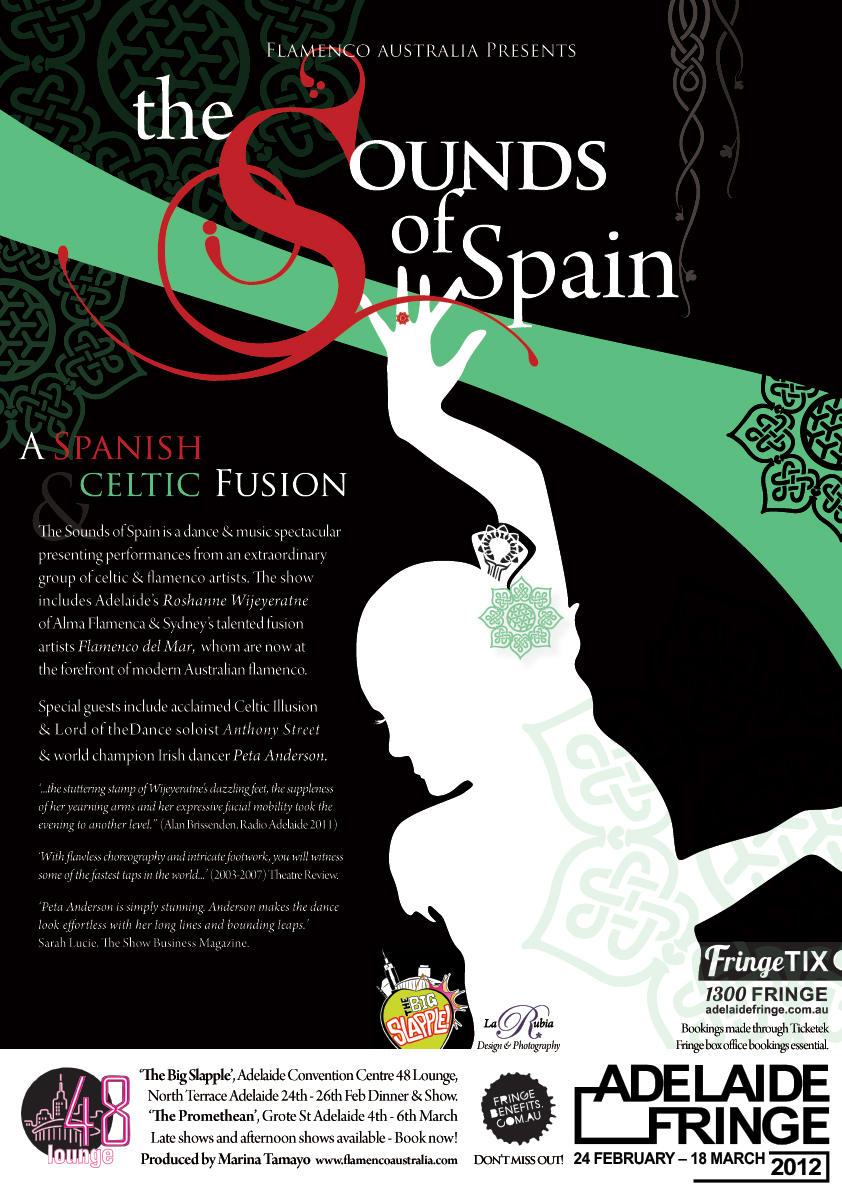 “All traditions flamenco are staunchly merged with Celtic displays in this moving, authentic revelation of Hispanic pride. It’s a musical tale of one woman’s journey from Spain’s south to north and is presented by some of the most talented, quickest and most energetic Irish dancers you’ll ever see and likely the most professional modern flamenco dancers to grace us. Performers’ footwork, costumes and music were superseded only by their energy, grace and passion. Final Word: Spectacular”
– Jenny Smith, Rip It Up
RIt Up website – http://www.ripitup.com.au/article/5255

“The audience interaction with artists was great, they loved it. Their cheering ‘ole, guapa’ was a constant in every song, totally irresistible not to tap with your feet. Don’t miss out this fascinating Flamenco experience…”
– Anderina Adames, Radio Adelaide
Radio Adelaide – http://festivalradio.wordpress.com/…/sounds-of-spain-audio…/

We are currently seeking professional representation in the Australian and regional sectors, Asia- Pacific and Asian markets to tour, and present THE SOUNDS OF SPAIN  for curated festivals, corporate events or longer term residencies in theaters. Contact us: admin@flamencoaustralia.com or +61 415384038 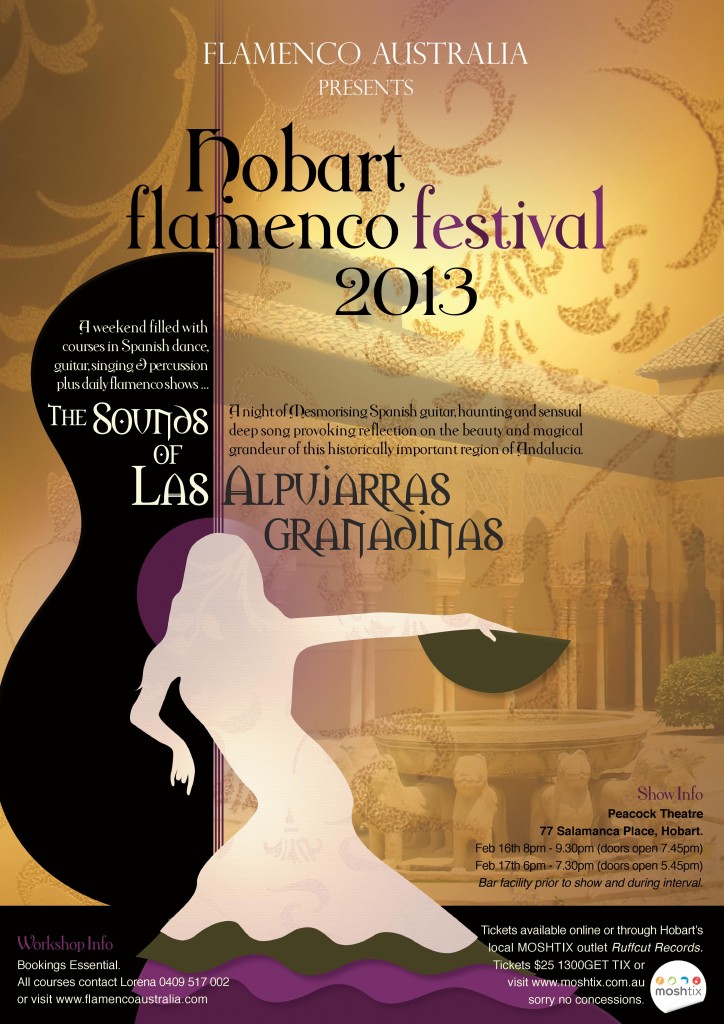 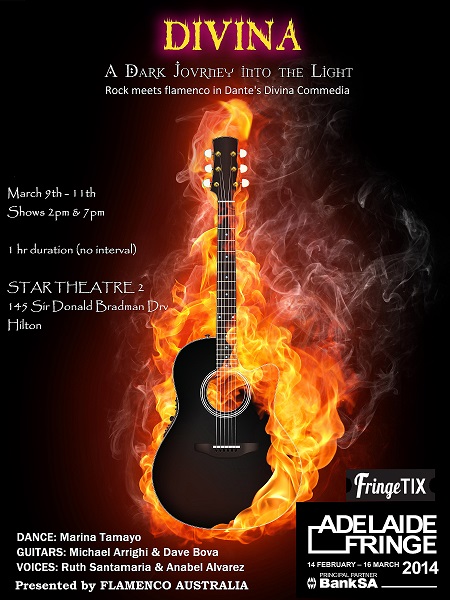 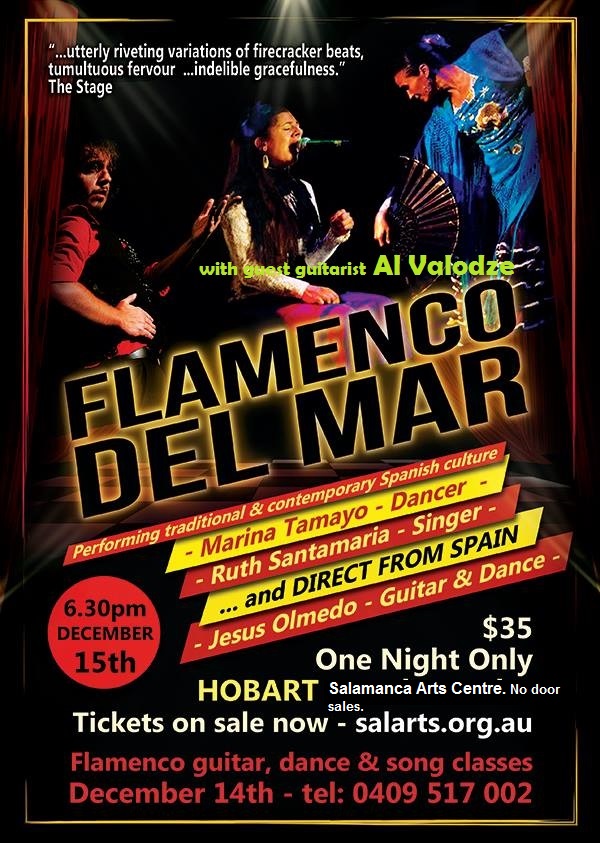 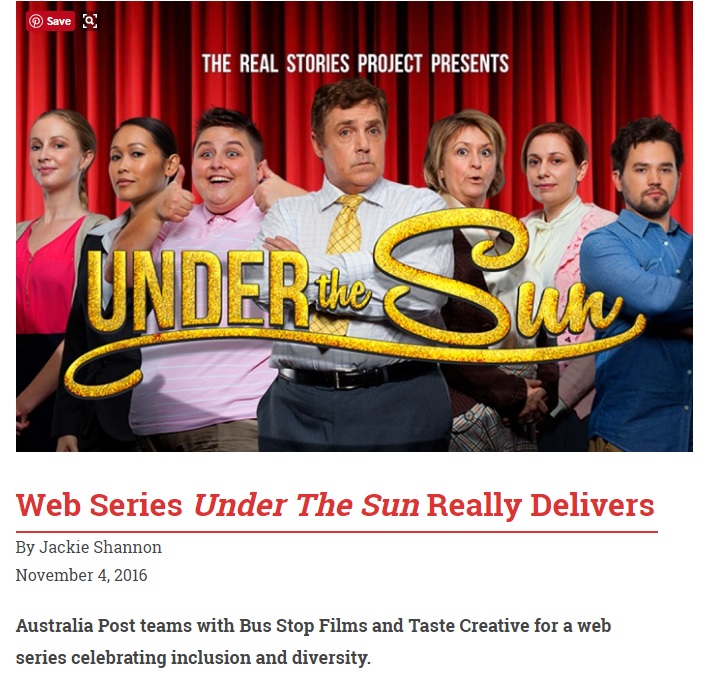 FEB 24th – 4th 2012 March ‘The Sounds of Spain’ at The Adelaide Fringe Festival 2012 * Receievd 4.5 stars from ‘The Advertiser’ ‘Fablulous and must see’ by Rip it up and ‘Brilliant’ by Adelaide today!